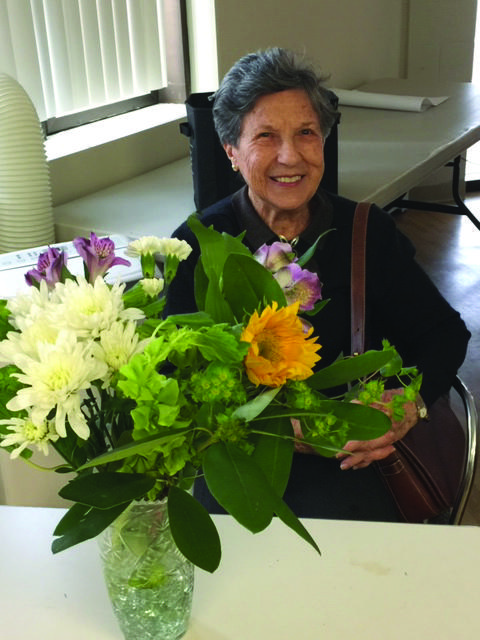 Cindy and David Leffell, along with David’s three brothers (Jonathan, Daniel and Michael) recently endowed a fund to honor the memory of their mother. During Freda Leffell’s six years as a Towers’ resident, “It was a wonderful home”, says her daughter-in-law, Cindy. “The staff was extremely warm. They knew her well and really looked out for her.”

Freda had spent most of her life in Montreal. Her husband, Bernard Leffell, was the founding rabbi of Congregation Shaare Zedek, and Freda was the quintessential rebbitzin. Rabbi Leffell died in 1999, and Freda continued to live in Montreal even though her four sons were all in the northeast U.S. (one in Boston, two in Westchester, and David in New Haven). As she got older, the family decided it would be best for her to move closer to her children and grandchildren. After considering options in Boston, Westchester, and New Haven, they decided that The Towers would be the best environment and best location for her. And it was. Freda was an active participant in The Towers’ synagogue and also enjoyed many of the other activities there, like the horticulture group, book discussions, and knitting group.

When Freda died, the Leffells wanted to create something that would honor her memory and reflect the values that were most important in her life. They established the Freda Leffell Fund for Jewish Life at The Towers to support all that The Towers does to add to the spiritual life of its residents – the synagogue, rabbis’ discussion groups, pastoral care, mashgiach, and cultural and artistic performances.

Cindy, currently vice chair of The Towers board, has served on the board and various committees off and on for more than 25 years. She notes “It was interesting to observe that as Freda aged and her dementia progressed, the rhythms and cycles of the Jewish calendar were among the habits and memories she held onto the longest—preparing for Shabbat, the prayers and melodies of the Shabbat service, etc. We imagine other residents may experience this as well. The Towers has wonderful programming to support these needs, and we want to ensure its continuation.”

David agrees, “As the Jewish community of New Haven ages, we hope that all will remember the commandment: “Honor your father and mother that you may live a long, full life. What could be more important than respecting our elderly and finding ways to ensure that they are cared for in a safe and humane environment. Given our family’s long history with The Towers, we know this is such a place.”

The Jewish Foundation of Greater New Haven manages endowment funds created for the benefit of The Towers. To learn more about creating your legacy, contact Executive Director, Lisa Stanger at lisa@jewishnewhaven.org or contact Jennifer Bayer, Director of Development and Community Relations at 203-772-1818, ext. 290 or Jennifer@towerone.org.

©2021 The Towers at Tower Lane. Site designed by Elements®